Louis Vuitton Malletier, commonly referred to as Louis Vuitton or shortened to LV, is a French fashion house founded in 1854 by Louis Vuitton. The label's LV monogram appears on most of its products, ranging from luxury trunks and leather goods to ready-to-wear, shoes, watches, jewelry, accessories, sunglasses and books. Louis Vuitton is one of the world's leading international fashion houses; it sells its products through standalone boutiques, lease departments in high-end department stores, and through the e-commerce section of its website. For six consecutive years (2006–2012), Louis Vuitton was named the world's most valuable luxury brand. Its 2012 valuation was US$25.9 billion. The 2013 valuation of the brand was US$28.4 billion with revenue of US$9.4 billion. The company operates in 50 countries with more than 460 stores worldwide.

The Louis Vuitton label was founded by Vuitton in 1854 on Rue Neuve des Capucines in Paris, France. Louis Vuitton had observed that the HJ Cave Osilite trunk could be easily stacked and in 1858, Vuitton introduced his flat-bottom trunks with trianon canvas, making them lightweight and airtight. Before the introduction of Vuitton's trunks, rounded-top trunks were used, generally to promote water run off, and thus could not be stacked. It was Vuitton's gray Trianon canvas flat trunk that allowed the ability to stack with ease for voyages. Many other luggagemakers imitated LV's style and design.

The company participated in the 1867 Universal Exhibition in Paris. To protect against the duplication of his look, Vuitton changed the Trianon design to a beige and brown stripes design in 1876. By 1885, the company opened its first store in London on Oxford Street. Soon thereafter, due to the continuing imitation of his look, in 1888, Vuitton created the Damier Canvas pattern, which bore a logo that reads "marque L. Vuitton déposée", which translates into "L. Vuitton registered trademark". In 1892, Louis Vuitton died, and the company's management passed to his son. 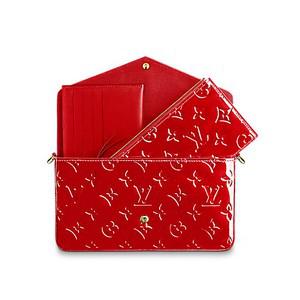 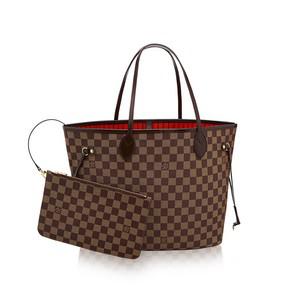